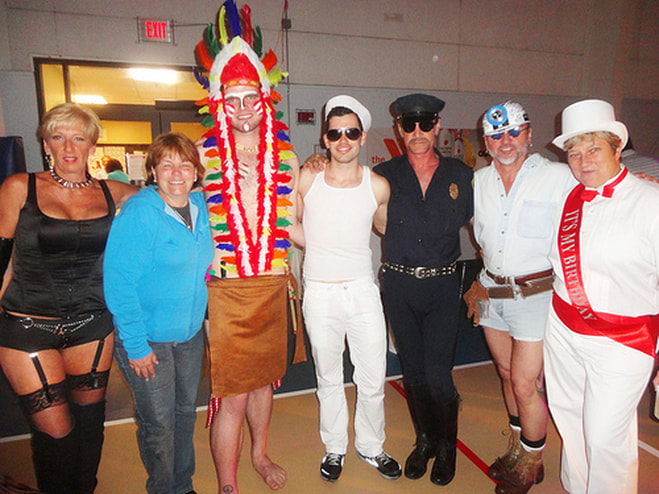 One of Georgia's foremost vacation hotspots became a pioneer of inclusiveness as Tybee Island hosted the first-ever Tybee Gay Days in May 2013.

Tybee Island Mayor Jason Buelterman fully supported Tybee Gay Days. "The first Tybee Gay Days event was not only good for our island's businesses, but helped raise funds for some worthy causes and made our island's beach cleaner thanks to a beach sweep that was part of the event. We hope the organizers come back to Tybee next year," Buelterman told us.

Just before the event's opening night on Friday, May 3, an unseasonal storm blew in. Winds gusted up to 30 mph. Heavy rains fell nonstop. The temperature dropped into the fifties. In spite of the weather challenges, attendees arrived from Tybee Island, Savannah, and across the country.

We spoke to Larry Hodges, owner of GaySavannah.com at the Tybee Gay Days Kick-Off Party event at the North Beach Grill. "We have attendees coming from all over - Brooklyn, Miami, Atlanta - all over!" Hodges told us.

The Kick Off Party was a well-attended "lively soiree" in which the first 250 attendees received a free "swag bag filled with goodies from sponsors."

The Kick Off Party was followed by an After Party at the Tybee Social Club where attendees partied until 3:00 a.m.

On Saturday, May 4, Jennie Orr, owner of Fannies On The Beach and Marlin Monroe's hosted the All-Day Beach Celebration on the beach in front of Marlin Monroe’s. Gay Days attendees were invited to "Spend the day relaxing along the strand, sipping cocktails and enjoying fresh seafood at Marlin Monroe’s." It was meant to be the perfect kick-off for the summer season.

On Saturday evening, Tybee Gay Days hosted a "Sexy HIV/AIDS Dance Fundraiser" White Party.  Attendees were invited to "dress in white and dance as the sun goes down."

The highlight of the White Party was a musical performance by Randy Jones from the legendary disco band The Village People. Jones was the original Village People cowboy. The dance floor filled with smiling, dancing couples as Jones shared one energetic disco tune after another.

The White Party was followed by a "Big Deck Party" at the Tybee Social Club. $5 from every ticket sale was donated to Savannah Pride and Pflag Savannah.

On Sunday, May 5 attendees enjoyed a Sunday Brunch at one of three of Tybee favorites: CoCo’s Sunset Grille, Fannie’s on the Beach and the Tybee Social Club.

Tybee Gay Days wasn't just about partying into the night though, attendees also did community service work by gathering together for a Beach Sweep to clean up Tybee Island beach.

After a weekend of fun, attendees gathered at one of Tybee Island's most romantic locations - the Tybee Island Wedding Chapel - for the T-Dance closing party where they enjoyed live performances by Kristina Foxx, Chanel Stevens, Angel Collins and Destiny Myklz.

In spite of the unforseen weather challenges, Tybee Gay Days was a success. We agree with Mayor Jason Buelterman and hope this becomes an ongoing event that benefits both the LGBT community and Tybee Island for many years to come.