GAY TRAVELERS MAGAZINE
Visit our YOUTUBE for our travel videos! ​ 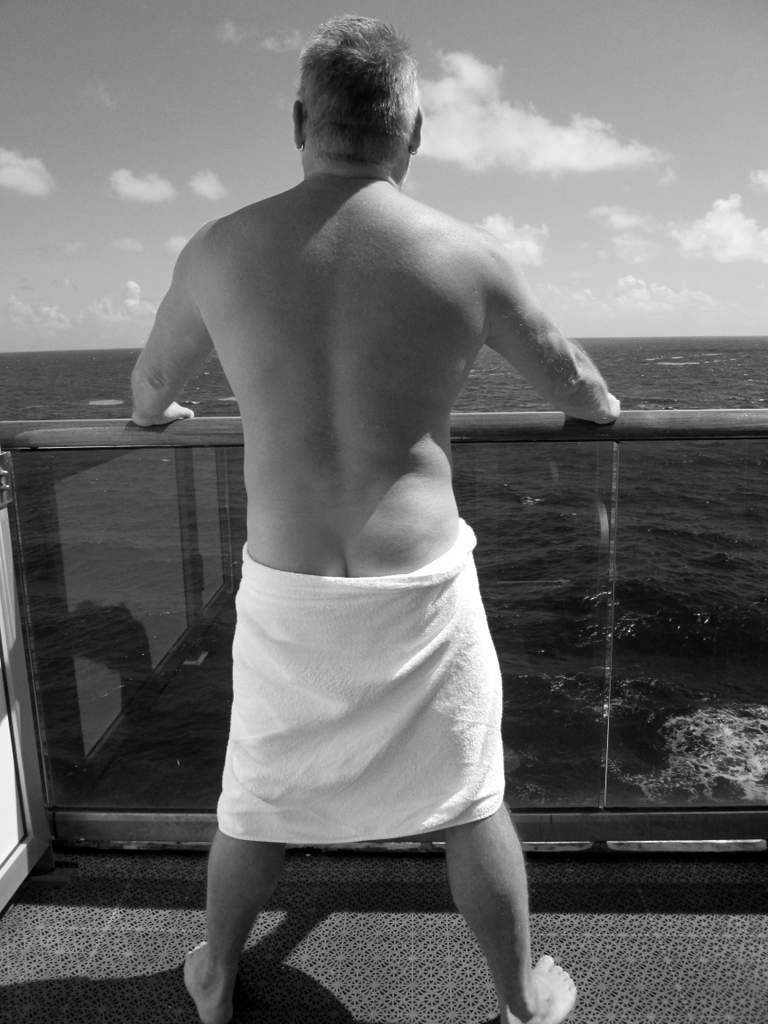 It was my first cruise ship vacation. My friends had been trying to get me to go on one for years. Their arguments for cruise ship vacations were very convincing: 1) you pay one price for your room and meals combined 2) I would only have to unpack once during my travels 3) my hotel room would travel from place to place and I would enjoy a new adventure each morning.

I decided that I had to give it at least one try.

Boarding the ship was easier than I expected and I was soon in my comfortable but smallish cabin. I had decided to splurge and reserve a cabin with a private balcony. The large glass window and door to the balcony made the cabin seem bigger too.

After enjoying a drink and the sail-away activities as we left port, I went back to my cabin, took a refreshing shower, wrapped a clean, fluffy white towel around my waist, poured a cocktail and stepped out onto my balcony to watch the sea passing calmly by below.

I looked to my right and found a handsome man standing on the next balcony, peeking around the dividing wall with a big grin on his face.

“Hello to you too,” I replied.

“My name’s Tom. It looks like we will be neighbors. Are you cruising alone?” he asked.

“Yes, I am the only one in this cabin,” I said. “This is actually my first cruise.”

“Well, we’ll have to make sure it is a good one then,” he said with a wink and another smile.

“I see you’ve already gotten comfortable,” he said nodding at the towel around my waist.

“It seemed like a good time to grab a cocktail and get comfortable,” I said. “I didn’t really expect anyone to see me.”

“You should dress or undress any way you feel comfortable,” Tom said. “Hell, half the time I am on my balcony, I am buck naked without even a towel!” he said and then laughed.

“Well you go ahead and be buck naked all you want, Tom,” I said looking him directly in the eye. “I don’t mind a bit.”

We both stared out at the passing sea below for a few moments and then I asked, “Are you traveling alone, Tom?”

“Hell, no!” He replied. “My wife is part of a ladies’ card group. They meet on these cruises and play cards all day and all night.”

“That doesn’t sound like much fun for you,” I said.

Tom laughed and said, “Son, when you’ve been married for as long as I have, you find your fun in other places.”

“To whatever makes you happy!” I said and lifted my drink as if making toast.

“Actually,” Tom said somewhat hesitantly. “There is a group of husbands from the card group who get together for some fun when the wives are busy with their games. You should join us tonight. I just ask that you be open-minded.”

“It might be nice to meet some new friends on this cruise,” I said. I wasn’t sure what Tom meant by being open-minded so I asked. “I think I’m a pretty open-minded guy. Is there something I need to know?”

Tom looked at me for a moment. I was almost certain that his gaze drifted down beneath my waist for a second or two to look at the bulge at the front of my towel and then he said, “This is just a time for the guys to get together – stress free – and relax. We meet in the steam room. Most of us don’t even wear a towel. We just relax and enjoy some guy-time together.”

“That sounds pretty good to me,” I said.

Tom smiled and before he turned to walk back into his cabin I could almost swear that he stole another glimpse at my bulge.

About 6:10, I went to the men’s locker room, undressed, put my belongings in a locker, wrapped a towel around my waist and then walked toward the steam room. The door was made of glass but the steam had built up so much that it was impossible to see inside. I opened the door and stepped in.

It took a moment for my eyes to adjust to the steam floating heavily in the air but as my vision cleared, I could see the outlines of about a half a dozen men sitting on the benches. Some of them seemed to move a little as I entered as if I had interrupted something they were doing.

I noticed Tom sitting to my left just as he noticed me. He motioned for me to come take the empty spot on the bench beside him. I walked through the hot fog and sat down beside Tom. As I got nearer, I noticed he was sitting on his towel but he was completely naked. I looked around the room and saw that everyone was sitting on their towels and they were also completely naked.

I unwrapped my towel so that I was sitting on it but it was no longer tied around me. Tom stole another look at my groin area except this time there was no towel covering anything. He saw that I had caught him looking at me and he gave me a wink and a smile.

I looked down at Tom’s manhood. His cock was uncircumcised and a little larger than average. When Tom noticed where I was looking, his hand went down to his cock and he began to stroke himself softly and slowly. He looked at me to see if I was going to object. When I didn’t say anything, he stroked more openly.

The longer he stroked, the harder he became. Within seconds, he had a complete and beautiful erection.

I could feel my own cock growing as I watched Tom stroke himself. I reached down and began to imitate his strokes on my own cock.

I noticed some movement in the room around us and I looked up to see we weren’t the only ones enjoying each other. Men had paired up around the steam room. Some were stroking each other. Some were standing while another sucked their cocks. So this is why Tom told me I needed to be open-minded about the husbands’ group!

Tom stood up. His rock-hard erection was sticking out and up. As he turned to face where I was seated, his cock pointed at my face invitingly. I reached out, grasped his shaft in one hand, cupped his balls gently in my other hand and guided Tom’s cock into my mouth. He moaned in pleasure.

I pulled his cock out of my mouth and began to tease Tom with my lips and tongue - kissing and licking around his penis, on his inner thighs, on his testicles, and then slowly up his shaft towards his penis’ head. When I reached his head I used my tongue to tickle him around the glans and especially on his frenulum - the split on the underside of his penis. He moaned and began to move his hips gently in a thrusting motion.

I alternated looking at Tom’s beautiful throbbing cock and up at his face which was emanating pure pleasure because of my efforts below. As I licked his frenulum I glanced down and saw his balls had constricted – a sure sign he was nearing climax.

I immediately wrapped my lips and tongue around Tom’s cock and took him into my mouth completely. I gently pulled his foreskin back and held it there with one hand at the base of his cock so that his head was completely exposed to my tongue.

My tongue and lips made long strokes from the base of his shaft to the tip of his head and back again over and over. Tom’s hips began to match my rhythm and then began to speed up and control the rhythm on his own - faster and faster and faster.

And then with a loud moan, he came. His body spasmed again and again in ecstasy until he was spent. I kept him in my mouth until he softened within me.

Tom pulled himself gently out of my mouth and then bent down and kissed me on the lips. His tongue slipped between my lips and played with mine. Then he stood back up and hugged me to his body.

It was a wonderful experience.

I found a whole new group of friends on that cruise.

Tom and I had many more steam room romances during my first cruise vacation. It was the best part of my trip. Though that was my first cruise, it certainly was not my last.

If you ever decide to enjoy a cruise vacation of your own, be sure to drop by the steam room around 6:30 p.m. You might find a pleasant surprise.
Gay Travelers Magazine
the best cruise & travel news, tips & reviews for the sensible gay traveler