Nashville – The Songwriting Capital Of The World and Much, Much More 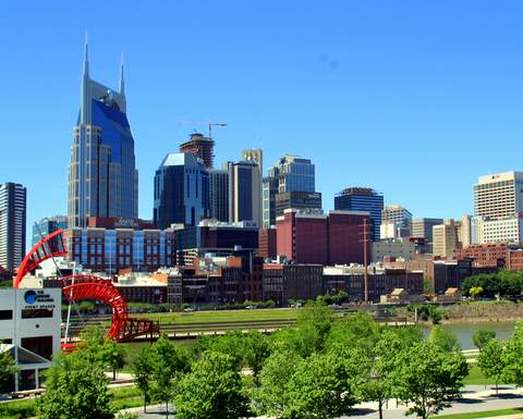 The Songwriting Capital Of The World and Much, Much More


By Steven Skelley and Thomas Routzong

When you say the words “Nashville, Tennessee,” you probably immediately think “country music.” Nashville is called Music City and The Songwriting Capital Of The World for good reason. We visited Nashville and discovered a vibrant, modern city with deep, historic roots and a unique style all its own.

We asked Heather Middleton, Vice President of Public Relations for the Nashville Convention & Visitors Corp., to tell us more.

How would you describe Nashville in one sentence?

Nashville is an authentic and friendly city that fosters creativity in many different forms – from makers to musicians – in a unique, unpretentious atmosphere.

What can you tell us about the history of Nashville?

From its very beginnings, Nashville grew from a foundation built on music. Music has been the common thread connecting the life and soul of the city and its people. And visitors have ventured here to experience the music that weaves such a fundamental pattern in its cultural, business and social fabric.

As the 1800s unfolded, Nashville grew to become a national center for music publishing. The first around-the-world tour by a musical act was by the Fisk Jubilee Singers from Nashville’s Fisk University. Their efforts helped fund the school’s mission of educating freed slaves after the Civil War – and also put Nashville on the map as a global music center. In fact, upon playing for the Queen of England, the queen stated the Fisk Jubilee Singers must come from the “Music City.”

The Ryman Auditorium was erected in the late 1800’s as a tabernacle.  Before even the Ryman became known as the downtown home of the Grand Ole Opry, it already enjoyed a national reputation. Enrico Caruso, John Phillip Sousa and the Vienna Orchestra gave roof-raising performances there that earned the Ryman the nickname “Carnegie Hall of the South.” The Ryman’s unrivaled acoustic qualities continue today – it has received Pollstar magazine’s prestigious “Theater of the Year” award seven times in the past ten years as the best auditorium in the nation to experience live music.

In 1925, the establishment of radio station WSM and its launch of the broadcast that would be called the Grand Ole Opry further secured Nashville’s reputation as a musical center and sparked its durable nickname of Music City. The Opry, still staged live every week, is America’s longest-running radio show, in continuous production for more than 90 years. It ignited the careers of hundreds of country stars and lit the fuse for Nashville to explode into a geographic center for touring and recording.

The modern- day empire of Music Row, a collection of recording studios, record labels, entertainment offices and other music-associated businesses, populates the area around 16th and 17th Avenues South.

Nashville has also long been known as the “Songwriting Capital of the World.” Songwriters from all over the globe come to Music City to learn the art and share their passion of songwriting.

The famous Bluebird Cafe showcases songwriters performing their original music in an intimate “in the round” setting that was created in Nashville and allows them to share the stories of inspiration behind their songs.

Nashville Songwriters Association International, NSAI, which fosters the art of songwriting and works to protect artists’ rights, is headquartered here.

The annual Tin Pan South Songwriters Festival puts these songwriters somewhere they’re not use to being, in the spotlight. Over the course of five days, more than 300 songwriters perform at venues around town.

In recent years, cable television has broadcast Music City’s stars and music to the world. CMT and GAC have taken country music to a new level of acclaim and recognition. The gospel music series hosted by Nashville’s Bobby Jones on Black Entertainment Television is cable’s longest-running program. Bobby Jones Gospel is coming to an end in 2017 after 37 successful years.

And now on CMT and in its 5th season, the Nashville TV show is filmed right here in Music City and has acheived worldwide popularity. Several well-known Nashville restaurants, landmarks, venues, fashions, and art pieces can be seen featured on the show.

Nashville is home to United Record Pressing, North America’s largest volume producing vinyl record plant. Opened in 1949, United Record Pressing has pressed vinyl records for everyone from Miles Davis, Bob Dylan, and The Beatles to Beyonce, Justin Timberlake, and Ludacris.
Center for the Visual Arts, the Country Music Hall of Fame and Museum, the Music City Walk of Fame and the Bridgestone Arena.

The Music Mile perfectly illustrates how the music of Music City is indeed a common thread throughout the business, cultural and entertainment sectors of Nashville.
Live music can be seen and heard every day and night of the week in Nashville. The world-famous honky tonks, located on Broadway, offer free live music 365 days a year. And with more than 150 music venues around town ranging from large arenas and concert halls to small clubs and featuring nearly every genre of music, it’s easy to see why this is the city that “music calls home.”

Nashville’s connection to music is unequaled, and its reputation as Music City has been consistently proven for over 200 years. Welcome to the city where music is written, recorded and performed every single day. Welcome to Music City.

What can you tell us about attractions, entertainment and dining in Nashville?

Nashville has no shortage of impressive attractions and entertainment venues, many of which recently celebrated major anniversaries. The Ryman Auditorium celebrated 125 years in 2017. The list of performers in the hallowed auditorium include the likes of Elvis Presley, Bob Dylan, Johnny Cash, Charlie Chaplin, Helen Keller, Patsy Cline, Diana Ross, Little Big Town, Jack White, and so many more.

The Country Music Hall of Fame and Historic RCA Studio B celebrated 50 and 60 years, respectively, in 2017 and are popular tourist destinations.

The Bluebird Cafe, which rose to fame with the popular Nashville series, is the perfect spot to catch an intimate show, performed “in the round” in the small cafe located in an unassuming strip mall. The cafe celebrates its’ 35th anniversary in 2017.

Music City Walk of Fame (10 years), The Nashville Symphony (70 years), The Frist Center for the Arts, and The Parthenon are all must-see attractions while in Nashville.

Nashville’s Honky Tonks line both sides of Lower Broadway and pump live music into the streets 365 days a year. There's no cover charge but the tip jar gets passed around for those wanting to appreciate the musicians that make Nashville Music City. The music starts at 10am with the party lasting until 3 in the morning.

With more than 150 music venues around town ranging from large arenas and concert halls to small clubs and featuring nearly every genre of music, it’s easy to see why this is the city that “music calls home.”

Dining in Nashville has seen a transformation in recent years as many chef-driven restaurants have opened across the city, spotlighting locally-sourced, sustainable food. However, the popularity of three traditional food groups in Nashville has not wavered: Meat & Threes, Nashville hot chicken, and BBQ.

Why is Nashville such an important piece of music history?

Nashville and music go hand and hand, and have since the 1700s. The first around-the-world tour by a musical act was by Nashville’s own Fisk Jubilee Singers in the late 1800s.

The Ryman Auditorium which would later become a world-class musical venue first opened as a tabernacle in 1897.

Radio station WSM was established in 1925, with a broadcast called the Grand Ole Opry. Still in business today, the Grand Ole Opry is the nation’s longest-running radio show, and helped launch the careers of hundreds of country stars, in addition to helping establish Nashville as Music City.

As the reputation of Nashville as a musical hub continued to grow, artists and songwriters of all genres began to flock to the city. Today pop, rock, bluegrass, soul, classical and Americana music are all written, recorded, and created in Nashville.

Why is Nashville such a popular destination?

The diversity Nashville offers makes it a popular destination. From the world-class dining options, to the renowned musical venues and shows, to the Honky Tonks, history, and art museums, Nashville has a little bit of something for everyone.

From The Ryman Auditorium to The Country Music Hall of Fame to Music Row to a Grayline Home Of The Stars Tour to the Nashville Zoo, we enjoyed exploring Nashville. It is a a vibrant, modern city with deep, historic roots and a unique style all its own.

For gay travelers, Out & About Nashville offers a Nashville Gay Travel Guide at https://www.outandaboutnashville.com/guide#.WVE6P44rLcs
​