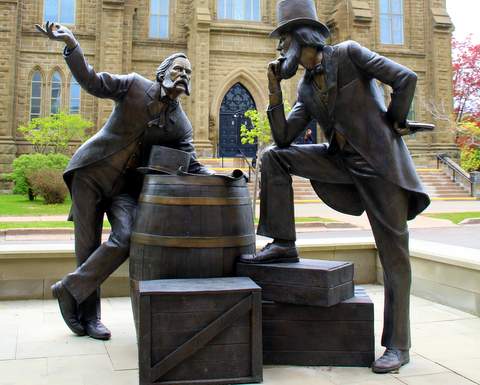 ​By Steven Skelley and Thomas Routzong

Charlottetown is known as the birthplace of Canada. Delegates arrived here in 1867 to decide whether Canada should seek its own path. Even though the town has less than 40,000 residents, more than one million tourists visit each year. Tourism has taken the place of shipbuilding as the main revenue source.

We chose to book a tour online with Rusty Rover Tours. Our tour guide Alan Buchanan is the retired Attorney General who is now an actor and professional storyteller. He gave us an excellent, laugh-filled tour of Charlottetown. Everyone in town seemed to know Alan and stopped to greet him.

How would you describe Rusty Rover Tours in one sentence?

If you want to know and understand The Island and its resident families, hear its stories joyous and tragic as you lose your breath at its beauty, that is where you will find the heart and soul of Rusty Rover Tours.
What can you tell us about the history of Rusty Rover Tours?

Rusty Rover Tours had its beginnings in 2012.  I had been employed in the tour guiding and driving industry for fifteen years and could see a niche where a much better product could be offered, particularly in the quality of commentary being offered to visitors. Mildly grumbling about this situation to my family at Christmas 2011, the family said, "Well Dad - do it yourself!"

Joan, my wife, enthusiastically joined the fledgling project. The name Rusty Rover Tours resulted from a family brainstorming session, Rusty being the characteristic colour of the Prince Edward Island soil and Rover alluding to the practice of touring.

As fox farming contributed great wealth to the province a century ago and the fox in many varied colourations is a common wild animal sighting, the fox has become the mascot and logo of the company.  A toy stuffed fox is always on tour in one or another of the vehicles.

Over the years since its beginning Rusty Rover has grown several times over, adding vehicles of its own along with five driver-guides plus working with numerous cooperators with larger vehicles when required.  For many groups and motor coaches 'from away' we are go-to people to provide step-on guides.

Professionalism is a hallmark of Rusty Rover Tours.  Every driver is required to have a chauffeur's license or better and must hold a professional national certification as a tour guide.

Rusty Rover Tours consistently receives high ratings on Trip Advisor for the professionalism and courtesy of the guides as well as frequent references to the quality of their vehicles.

What do guests see on a tour of Charlottetown?

A tour of Charlottetown may be so simple as visiting Province House and Great George Street, the birthplace of Canada, Saint Dunstan's Basilica (yes, Basilica) and doing a foodie walkabout. Or you can broaden your walkabout into a cruise of the shopping district and enjoy a very fine modestly priced fish dinner.

Most folks will add a shore excursion of maybe four hour to see the gorgeous countryside, rolling hills and landscapes, seascapes, red cliffs and fishing villages, all the while watching for bald eagles, ospreys, crows and foxes. Charlotttetown and Prince Edward Island in general have played many historical roles, far in excess in numbers and significance of what may be suggested by its small geography.

Your guide will be proud to describe for you the five major industries: agriculture, tourism. fisheries, aerospace and bioscience.  Take note of the islanders' efforts at maintaining a healthy environment, tidy rubbish-free roadsides and unspoilt vistas.

What tours are offered by Rusty Rover Tours?

Rusty Rover always customizes and personalizes their tours to the interests of the clients and is proud of their ability to find out such interests and their flexibility to modify any itinerary to suit.

Unlike others who offer inflexible tightly scheduled and scripted itineraries, including set departure times, pick-up stops and attractions to be visited, Rusty Rover is flexible and can set a meeting place and departure time to the satisfaction of the client.

Where the client has no particular wishes regarding an itinerary, two pre-planned tours are popular:  Rusty's Shore Excursion and Off the Beaten Path.  Even those are often tweaked to best suit the client.

Rusty's Shore Excursion centres on the "Anne of Green Gables" book and its sequels in books, movies and television series.

Landscapes, seascapes and fishing harbours are chosen for excellent sightseeing opportunities en route to the various "Anne" venues:  Green Gables - the house which was the setting for Lucy Maud Montgomery's portrayal of growing up in rural Prince Edward Island around the 1890 - 1905 era; Dalvay House which was the model for the White Sands Hotel in the book and which has many times played host to royalty; Lucy Maud Montgomery's Birthplace - the house in which she was born in 1874; and Silverbush, the home of her favourite cousins, the Wonder Castle of her childhood, still lived in by descendants of her siblings.

You can expect to see foxes and ospreys on your tour and bald eagles are a frequent sighting. If the client so wishes, they can have lunch at an excellent fish restaurant.  Rusty Rover is unique in that the time spent stopped for lunch is not included in the calculation of the charges for the tour.

Off the Beaten Path takes the visitor in the opposite direction from the bulk of the tourists who generally flock to the Green Gables route.  It is rare for Rusty Rover's guests to trip across their cruise ship mates on this tour.

Off the Beaten Path includes lighthouses - at least two of which double as seafaring museums and can be climbed for a small fee.

An unexpected delight is a stop at a family industry which builds fiber processing mills for sale all over the world. The tour stops there as the venue is a demonstration and training facility for their clients in several dozen countries.  The machines are running and explained to the visitor. You can run your hands through the raw and finished materials which may include sheep wool of all manner, dog and cat hair, goat, alpaca and camel hair, plant fibres, even musk ox wool at $100 per ounce!

Lunch could be at a chowder house on the edge of the ocean, a restaurant in a fishing village or a light meal in a historical house of the 1800s, the home of an illustrious medical professor and medical officer in World War I, a friend of John McRae, author of "In Flanders Fields".
We have even done cemetery tours where visitors from "The States" want to visit the graves of ancestors of generations ago, or maybe the resting place of their favourite clergy who originated in Prince Edward Island and scattered all over.

Rusty sometimes manages to arrange 'serendipitous meetings' with relevant locals who can be woven into the visit to the joy and enjoyment of the clients.
Unless circumstances demand otherwise, every one of Rusty​ Rover's shore excursion tours includes a drive up Great George Street, designated a National Historic District because of the role it played in the founding of Canada, and other highlights of the city.
All tours are provided with a complete commentary by mature knowledgeable islanders explaining who we are as Islanders, how we came to be here and what we do here. Questions are encouraged because if there are no questions, the driver talks too much!

Why is Charlottetown such a popular destination?

Visitors themselves are the best judges of the visit they make to Charlottetown.  They comment on the friendliness of the Prince Edward Islanders that they meet on the street and in the commercial establishments.

The food is fresh and excellent. The downtown is very handy to the marine terminal so visitors can make shore excursions to major attractions yet have sufficient time to do walkabout in the downtown, possibly including oysters, mussels and lobsters for lunch.

Rusty and his guides love to point out the role that Prince Edward Island played in the formation of Canada; its remarkable history as a colony and the excellent quality of its agricultural products; its history as ship-building province and its current significance in its potato, aerospace, bioscience and information technology industries.

We chose to book a tour online with Rusty Rover Tours. Our tour guide Alan Buchanan is the retired Attorney General who is now an actor and professional storyteller. He gave us an excellent, laugh-filled tour of Charlottetown.
​
For more information about Rusty Rover Tours, visit http://rustyrovertours.com/