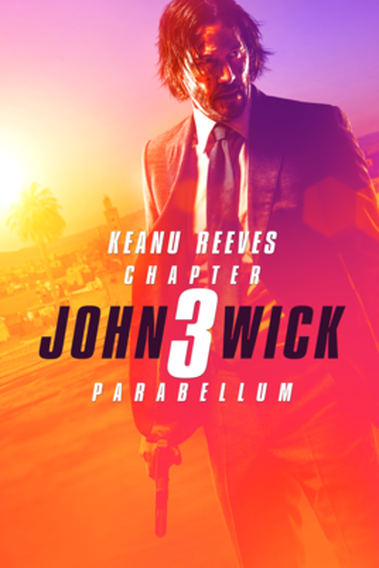 Keanu Reeves looks amazing as always - even at 54 years old - as he races cars, rides motorcycles, shoots bad guys from horseback and battles assassins of every race with every weapon imaginable. He loses body parts and faces a red hot branding iron not once but twice.

The action is non-stop. There are more fight scenes in "John Wick Chapter 3 Parabellum" than any movie I can remember. Bad guys and bad gals smash into buildings and vehicles, have swords driven through their skulls, have their heads explode when shot and have their crotches ripped apart by trained canines. And, it is all part of the John Wick fun.

Keanu Reeves and Laurence Fishburne are perfect choices for roles such as these and in "The Matrix." Some of the dialogue in Wick 3 will make Matrix lovers smile.

Halle Berry is a nice addition as a retired assassin who owes Wick for saving her daughter.  When he comes to collect, the pair kills just about every assassin in Casablanca.

Without giving any more away, the film ends with more than a hint that there will be a "John Wick Chapter 4."

This is not an Academy Award winning type of  film but it's not meant to be. It's a two hour and eleven minute, thrill-a-minute action movie starring the smoking hot Keanu Reeves. And that's just fine with me.
Gay Travelers Magazine
the best cruise & travel news, tips & reviews for the sensible gay traveler