Pigeon Forge – The Great Smoky Mountains Destination With Something For Everyone 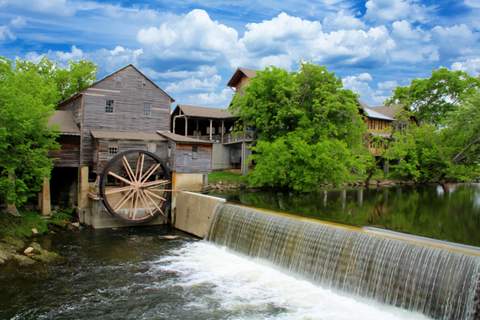 The Great Smoky Mountains Destination With Something For Everyone

Over 10 million people visit Pigeon Forge, Tennessee each year. The nearby 500,000 acre Great Smoky Mountains National Park is the most visited national park in the U.S. With beautiful nature, and abundance of dining options, incredible musical talent, plenty of stage shows and theatres, amusement rides, museums, shopping and Dolly Parton’s fantastic theme park Dollywood, Pigeon Forge is a vacation destination with something for everyone.

We asked Leon Downey - Executive Director of the Pigeon Forge Department of Tourism – to tell us more.

How would you describe the Pigeon Forge in one sentence?

Pigeon Forge is a special place in the Smoky Mountains where folks of all ages can enjoy everything from a great show to go-karts, hiking to watching a relaxing sunset, to delicious meals and comfortable accommodations.

What can you tell us about the history of the Pigeon Forge?

During the late 1700’s, settlers from the Carolinas followed the Great Indian Path through the Smoky Mountains along the Pigeon River and eventually settled in what is known today as Pigeon Forge.

The name Pigeon Forge evolved from two sources. “Pigeon” referred to the vast number of passenger pigeons that stopped along the river to feed on the nuts of beech trees that lined the banks. “Forge” referred to Isaac Love’s iron works, built on the east bank of the river.

Pigeon Forge continued as a sleepy farming community until Great Smoky Mountains National Park was dedicated in 1940. The town slowly began to grow, incorporating in 1961.

The tourism boom hit the city in 1982, and since then, growth has been rapid. Pigeon Forge has become one of the most popular vacation destinations in the Southeast United States.

What can you tell us about attractions, entertainment and dining in Pigeon Forge?

Pigeon Forge offers something for everyone, as evidenced by more than 80 attractions located in the year-round, family-friendly vacation destination.

Pigeon Forge delivers on the promise of offering something new every year, which means guests always have a new reason to come and visit, whether it’s to enjoy familiar favorites or try the latest, greatest addition.

From the world-class Dollywood theme park to a variety of nightly stage shows, the city’s entertainment offerings are first class.

As for dining, food is plentiful and delicious. The Old Mill restaurant serves three meals a day and grinds its own grain in its working mill. Pigeon Forge is known for the plethora of pancake house that serve up hearty breakfasts. Restaurants like Bullfish Grill and Local Goat offer expanded menus, too. No matter what your palette craves, Pigeon Forge has satisfying options for everyone.

Why is Pigeon Forge so connected with Dolly Parton?

With her Dollywood theme park located in Pigeon Forge, Dolly Parton is a local businesswoman who has provided not only jobs but also countless memories for our guests at her Dollywood properties.

She’s truly one-of-a-kind, and we are forever grateful for her many investments in Pigeon Forge and her love of and loyalty to the Smoky Mountains.

Why is Pigeon Forge such a popular destination?

Pigeon Forge is a popular vacation destination for so many reason.

First, its physically located within a day’s drive of 2/3 of the nation’s population that lives east of the Mississippi River. In other words, you can get to Pigeon Forge by car pretty quickly.

It’s the variety of attractions that appeal to various generations. Moms and dads bring their parents and their children, and they can all enjoy their visit together because our attractions have that multi-generational appeal.

Finally, Pigeon Forge treats guests like family. Southern hospitality is our calling card, and tourism is our number one industry.

We make it a point to treat folks well because we know that how they are treated will often times determine whether or not they come back.

And we want people to visit again and again.
​
Our Thoughts

​The parade draws up to 50,000 fans from all over the world. We were there in the front row and Dolly went by in her flowered dress.

She seemed to wave and smile at every fan she passed.

​Half of the fun is talking to the people standing next to you and discovering how far they’ve traveled to see the parade.
Hatfield & McCoy Dinner Feud

They call it "Feudin’ Feastin’ Family Fun."  Watch the longest running feud in history as the Hatfields and McCoys try to settle their differences mountain-style.

Both city folk or country cuzins will enjoy the “singing and dancing, mighty feats of strength, jaw dropping stunts and side-splitting comedy.”

This is one of the best dinner-theater meals we have ever enjoyed.
With a massive building and more than 30 magnificent horses, the show is filled with non-stop horse riding stunts, wild west segments, music and comedy.

The show opens with a friendly horse riding competition between two teams. Soon after, Native Americans performed with huge bison roaming the arena floor.
Cowboys round up Longhorn cattle, costumed men and women dance around a campfire, Southern belles lower from the ceiling to sing, children from the audience participate in a hilarious chicken race, lumberjacks compete in a variety of skills, the Skeeter & Nugget comedy team acts silly at every opportunity, wagons race, adults from the audience participate in a funny competition and a horse-shoe toilet seat toss, pigs race and there’s a star-spangled finale with a string salute to the American flag.

​Be prepared because they select audience members to join them on stage for silly fun.

The musicians are world class country music veterans who have played with well known stars.

The juggler had everyone laughing as he brought up a man from the audience, had him lie on the floor and then performed several feats standing over him as the man tried to protect the body parts that were most important to him.

Located in the Great Smoky Mountains, Dollywood has a unique country theme where every turn brings you into another neighborhood.

​Whether you want to visit an 1890's schoolhouse, a 1950's diner, or make a holiday stop in Rudolph's Holly Jolly Junction, there is something for every age to enjoy.
Hollywood Wax Museum

The Hollywood Wax Museum Pigeon Forge gives you the chance to get up close to your favorite movie, music and TV stars.

​We enjoyed walking from one display to the next taking photos of ourselves with the stars.

​Hint: Look for props nearby to make your photos even more fun!
Conclusion

With beautiful nature, and abundance of dining options, incredible musical talent, plenty of stage shows and theatres, amusement rides, museums, shopping and Dolly Parton’s fantastic theme park Dollywood, Pigeon Forge is a vacation destination with something for everyone.