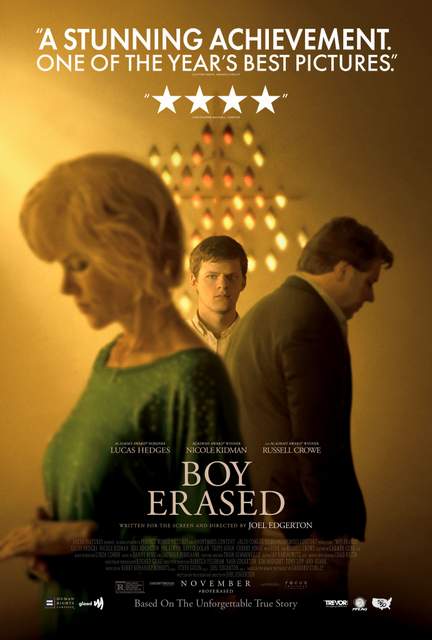 The film makes clear the "conversion" practices depicted are still legal in the majority of states. Over 700,000 LGBTQ people have endured such "therapy." It is a surprise and a strong statement that such cruel, inhumane, dignity-robbing, shameful attempts to change a person's sexuality is futile at best and literally a crime at worst.

I recently had the opportunity to see a very moving and insightful film, Boy Erased, about conversion therapy to change sexual orientatio9n from gay to straight. It's an important film for everyone to see, regardless of orientation or opinion, because, as the film makes clear, the practices depicted are still legal in the majority of states and over 700,000 LGBTQ people have endured such "therapy."

Boy Erased concerns Jared Eamons, a boy growing up in rural Arkansas, and the movie goes back and forth from childhood through high and college and the various experiences he has which confirm that his sexual orientation is towards other males.

His mother and father are extremely devout Christians, especially his father who's an uber-religious  Baptist minister. After confessing the truth to them, his father decides that it is best to place him in a conversion therapy program to rid him of this "sin" and return him to a "righteous" lifestyle.

Jared's introduction to the therapy center is abrupt, intrusive and shame-inducing. All of his possessions are confiscated and examined, including some  very personal writings that are destroyed without his permission, He and the rest of the "patients" are subjected to unrelenting mortification, brutality, cross-examination, and, in some cases, beatings.

Jared rebels against the Nazi-like leader and the center's tactics and surprisingly, after reading the manual of instructions the patients must follow, his mother supports him. It has been a profound learning experience for her, as she realizes God has a place in her life but so does the love for her son and that nothing can or will change that love. In a scene charged with emotion, she rescues him from the center and they return home.

The father is going to be more of a problem. He can not even discuss the issue, let alone read the exposés that Jared has had published to reveal what happens during this ordeal - the erosion of any and all sense of dignity, the ceaseless misuse of religion to instill shame and the brainwashing techniques which have led to a suicide.

The final scene of the film is profound. Father and son are together and in an act of extreme courage and determination, Jared tells his father that he will not and can not change and that for their sake of their future relationship,if there is to be one, it is the father who will have to adapt. The father admits how difficult it is for him to contemplate, but that he will try because he is not willing to lose his son.

Based on a true story, the movie not only painfully and graphically depicts the conversion therapy process, but also deftly explores how it affects and changes the dynamics of a family unit and the juggling sometimes required to accommodate love and a set of values.

Lucas Hedges is superb as the son, evincing the confusion and extreme pain not only of coming out, but also of growing up and becoming independent as well,  and increasing confidence as he takes a stand for himself.

Nicole Kidman's performance is full of delicacy and nuance, as she moves from being someone who "knows her place" with men and religion, to a redefinition of who and what she is, as she takes a stand for herself, as well, with a great sense of quiet strength that she always has had in latency, but brought to fruition as a result of her son's ordeal.

And Russell Crowe is masterful as the minister/father at once frightening, resolute, and, at the end, touchingly honest and imperfectly human, achingly inching towards remorse.

The supreme irony of the movie, for me, was when it was revealed, in a footnote, that the Nazi-like leader of the conversion center, unspeakably hateful and well-acted by Joel Edgerton (also the film's director and screenplay writer), went on to a happy and successful life as a gay man who has embraced what he really is.
​
It is a surprise and a strong statement that such cruel, inhumane, dignity-robbing, shameful attempts to change a person's sexuality is futile at best,  and literally a crime at worst.
Copyright 2019 CURT SOLASH

CURT LOVES OLDIES: Curt Solash dishes on the best and worst movies of all time

Curt Solash is a retired educator, an antique advertising collector and a lifelong cinemaphile from New York City who now lives in sunny Florida with his life partner.
Gay Travelers Magazine
the best cruise & travel news, tips & reviews for the sensible gay traveler